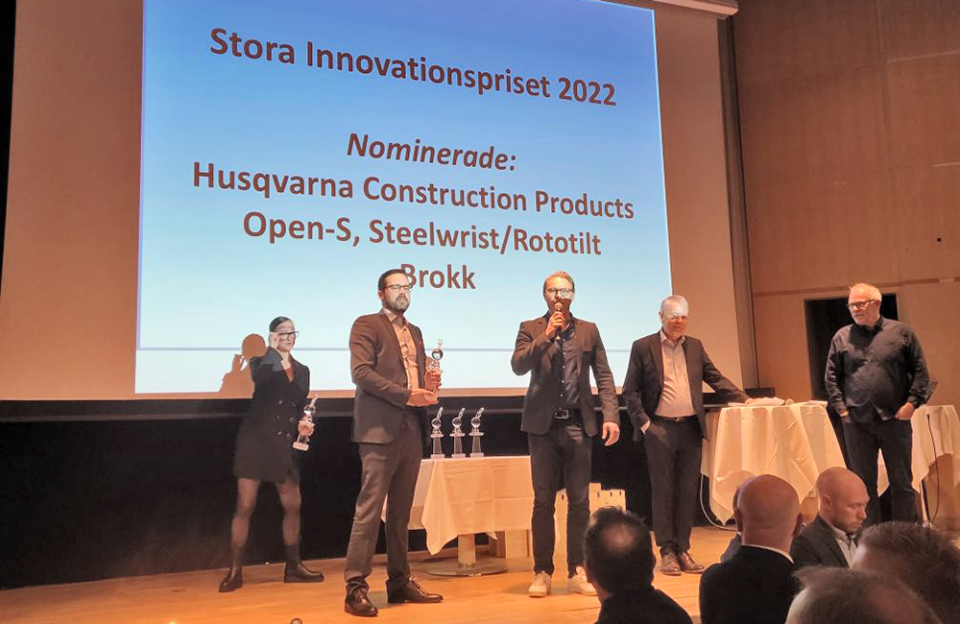 “We are very pleased with the award and it shows the support for an open standard that do not lock customers into a proprietary supplier solution for quick couplers, tiltrotators and work tools,” says Stefan Stockhaus, Board member of Open-S Alliance AB.

Swedish magazine Professionell Demolering in association with Swedish industry associations Drilling Contractors and Riv- och Saneringsentreprenörerna has handed out the Swedish Demolition Award (“Det Svenska Demoleringspriset”) since 2012. The “Great Innovation Award for manufacturers/suppliers” is given to a manufacturer or supplier for the launch of an innovation or a particularly distinctive development of an existing product.

In the demolition industry where many and fast work tool changes are common, fully automatic quick couplers are becoming increasingly popular. Open-S is a standard for the hydraulic interface between quick coupler, tiltrotator and attachments. The standard makes it easier for machine operators and contractors to choose machine couplers, tiltrotators and tools, and be confident that these work together. Open-S also safeguards against being locked into a single manufacturer’s proprietary solution.

“We are in talks with several manufacturers and hope to be able to announce additional members in the near future,” says Anders Jonsson, Chairman of the Board of Open-S Alliance AB.

For more information contact:
Anders Jonsson, Chairman of the Board of Open-S Alliance AB
anders.jonsson@opens.org, +46 70 590 09 49

About Open-S
Open-S – the open standard for fully automatic quick couplers for excavators. The purpose of Open-S is to offer compatibility between quick couplers, tiltrotators and implements from different manufacturers.
Open-S Alliance is a non-profit organization with purpose to develop and promote the Open-S standard. Read more at www.opens.org

We and our partners use cookies to improve and personalize your experience, display ads based on your interests and to measure and analyze data. By using our website and our services, you agree that we use cookies as described in our Privacy Policy.